Some news from ITER : load tests on the assembly bridge cranes

Teams are preparing now for the commissioning and dynamic load tests that will be carried out in the coming weeks on the assembly bridge cranes.

The load tests, which aim to demonstrate the structural integrity of the load path, were performed two years ago through the Assembly Hall; now, they must be repeated for the path that runs through the vast crane hall above the Tokamak Building (crane rails, runway beams, structural columns and the remainder of the civil works supporting the cranes).

The commissioning activities in the crane hall will require approximately one month. At their conclusion, the cranes will return to the Assembly Hall to be equipped for a series of load tests, this time with a load that is representative of the major components to be handled during the assembly phase.

In this second phase of testing, the bridge cranes will be fitted with two 350-tonne test loads (previously used to qualify the two vacuum vessel sector sub-assembly tools), plus additional loads to reach the required weight.

Before the overhead cranes leave the Assembly Hall for testing next door, they have been used to raise the 350-tonne test loads back into the « arms » of the sector assembly tools, where they are being equipped with frames  to carry the additional weight.
Rejoignez un groupe dynamique ! 200 postes à pourvoir Reel recrute partout dans le monde
Reel Carrières NFM Systems has designed and calculated the complete Liner. 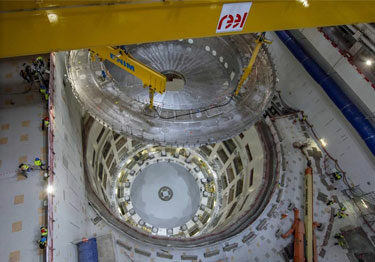